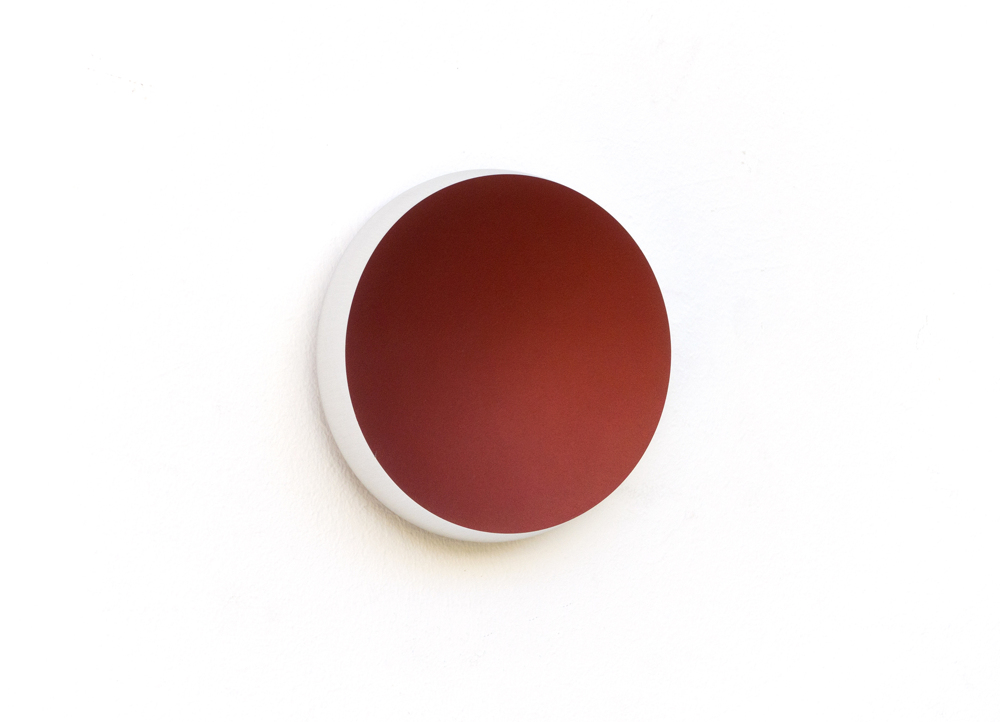 Although minimalist in appearance, Heiner Thiel’s work registers on multiple levels. First his pieces resist labeling either as painting or as sculpture. They concave saucers with straight sides, attached to the wall at a single point so that they float off the supporting surface. Like sculpture, they encourage you to move around them; like “radical painting”, they ask you to stand before them and study their monochromatic surfaces. Thus they keep the beholder off center. From head-on a piece initially reads flat, but the eye does quick double take and intuits an elusive depth. In the same way, the most successful piece looks square but proves to be a shade taller than it is wide, and looks black but turns out to be an inky, mysterious blue. It’s a canny play on Malevitch’s Black Square.

Second, Thiel’s work bespeaks technology: A machine abrades the surface, a factory arcs flat aluminum sheeting, a chemical bath anodizes a color. But the work is expressive and personal, as if you knew by looking at it that Thiel’s hand polished the surfaces and ground the endges. By computer modeling, he determines the radii, shapes, and colors. The result is a thoroughly industrial product that elicits contemplation.

Third level: The material and the immaterial. Thiel’s tangible metall forms feel weightless, and they would fit comfortably into an exibit like The Spiritual in Art. The actual portion of a sphere implies the whole sphere – working like negative space in a traditional sculpture – as if you were wrapped in an imaginary bubble. Itís not possible to delineate the colored space of a Thiel.

Similarly, the color is wedded to the aluminum but it appears to hover. Color is what people will best remember about his work – the Constructivist blacks, reds, yellows, greens. Thiel’s burnished surfaces glow and change with every step. Stretching up, crouching down, moving from side to side all become optical adventures. Chartreuse turns to yellow, rust to gold, black to indigo, shifting from pure absorption to unhampered reflection in more or less any ratio you choose. One moment color goes flat; another it radiates like a finish-fetish surface. And, in the same rhythm, arcs and curves echo and modulate. In certain light the corners darken and the center glows, so that what acutally lifts off the wall appears to recede and vice versa. In a digitalized world of instant communication, and out of industrial processes, Heiner Thiel has made art that works in slow motion.